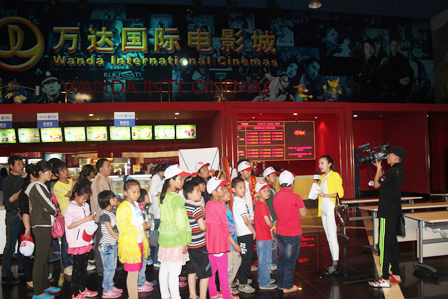 Children wait to enter the theater to watch The Croods.

More than 50 children, who had never watched a movie in theater before, were invited to visit the Wanda Cinema’s Saide branch and watch the Dreamworks blockbuster The Croods.

"I’ve been expecting this for a long time. Today my dream finally came true,” said one of the children.

The 3D computer-animated adventure comedy has been a huge hit with Chinese audiences. The kids were attracted by the story and impressed by the 3D effect and filled the whole theater with laughter.

After watching the movie, they were led to the screening room to learn about the evolution of screening technology.

The parents thanked the cinema and the volunteer league for their kindness while staff of the cinema also feel honored to be able to bring the children happiness.

"Creating common prosperity through charity is our mission,” said the manager of the Saide branch, “I believe the kids will also experience success and happiness brought by the innovation, braveness, perseverance and dream embedded in the movie.”

Wanda seeks to be a socially-responsible business, proactively assuming social responsibility. In the past 25 years, it has set a role model and a development trend for China's private enterprises.